I wrote this about a year or two ago while I was still working a lot with Databricks. It was right around the time where "MLOps" and "ML Engineering" were starting to get kind of hip and posting then probably would have been a better idea 🤪.

I was very frustrated by the machine learning workflow vs. what I am used to while developing web apps - it honestly felt like stepping back in time about 10-15 years. Like, you know, when you're learning to program and before you know about source control or automated testing. Except much slower because there is a ton of data that the ML training has to slog through. And the data science code that I've seen, while genius in its way, hasn't been written with maintainability in mind. Anyways, the good folks at Databricks pointed me to some resources and talked me through what they often saw, and I also rolled up my own sleeves. Hopefully this is still relevant for you.

Working with notebooks is a lot different than your standard dev environment, and the notebooks themselves make it easy to get lazy and have a bunch of spaghetti code lying around. Plus, you have to figure out a whole different way to work, integrate with source control, integrate with others, and run your automated tests.

We’ve gone through a couple of iterations for organizing projects, and have talked to Databricks about how they structure their own. This is what we’ve come up with and what we’ve been using for our ML project. So far, we're pretty happy with it - it’s not much different than a lot of Git-based development workflows + it has scaled well so far beyond one developer + across multiple different environments.

This is intended as a framework for future machine learning projects. No doubt there is room for improvement, so feel free to experiment and report back.

In terms of a workflow, I’m a fan of something similar to GitHub Flow (or there are a million variants).

Here is our ideal directory structure for the project. 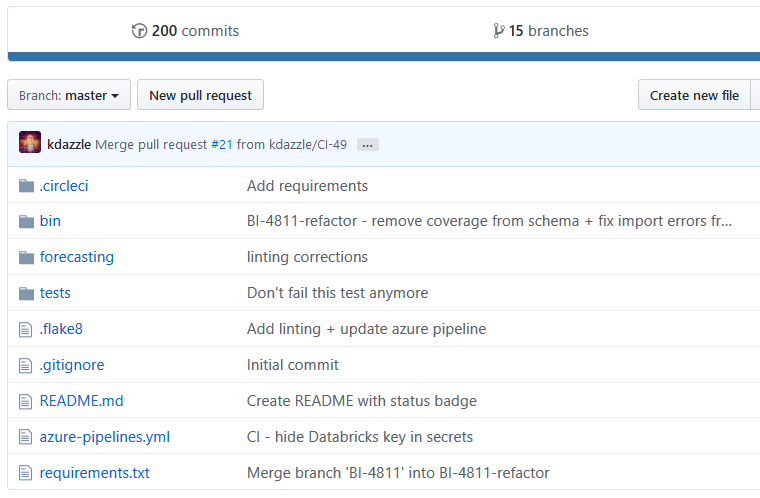 A lot of these are explained in the Databricks section, so I’ll just go over the rest of them here:

Databricks is great, but we’ve found it’s better to pull a lot of your code out into regular python packages and import them into your notebook. That’s better because:

This is how we import our package at the top of our databricks notebook:

This is what we’ve found works pretty well. It should closely mirror the structure of your project on GitHub. 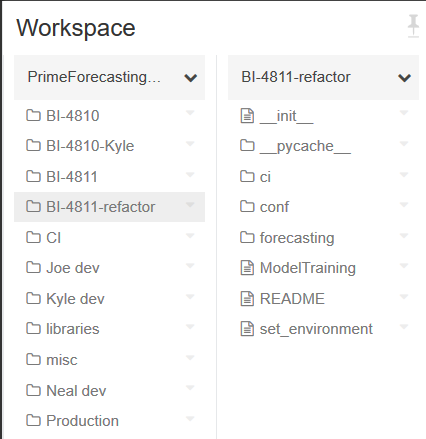 Here it is in its entirety

And replace ci_config with whichever config you want to be using.

The reason that we need a set_environment file is so that it's easy to switch between environments (prod and dev) without having to edit a real notebook. It decouples the environment from the code.

For example, what if we didn't have a set_environment file, and just specified whichever config file at the top of our Model Training notebook? Then everytime we were making a change, we'd have to remember to change our conf file reference first, and then change it back to prod before we commit the file to source control. And chances are that we would eventually use our prod settings in dev, or our dev settings in prod. Meaning that we could overwrite an important delta file, or not realize that our "prod" run has actually just been a "dev" run for a few weeks.

Or how would you dynamically set the environment? With CI, for example. You'd have to do some string parsing and remove the 3rd command from the top of the notebook or whatever, and it would be kind of messy and brittle. With the set_environment file, CI just needs to dump a single line into a new file for everything to work.

Secrets (any sort of key or password) should be stored in Azure Key Vault or Databricks secrets.

Secrets should never be put directly in a Databricks notebook unless you clear the revision history afterwards. Otherwise, anyone with access to the notebook will be able to go back and find them.

One key takeaway is that we don't want to mount the data lake as a drive due to security concerns. If we do that, then anyone with access to the Databricks instance can see everything in the data lake. By providing the oauth tokens, we can control access better.

This is still fairly new, but has actually saved a whole bunch of time already. Also, it really takes the mental weight off when you think about running a deployable version of your code.

The idea is that every time you push to GitHub, the job will run and then CI will tell you whether it passed or failed. So it’s on you to define any asserts or tests inside of your notebooks, but as is, if an exception happens, it will fail and it will show that in GitHub.

So you’ll want to set something up in Azure Pipelines and configure your azure-pipelines.yml file (see the Git project structure)

What that example script does is basically orchestrate sending the right version of code to Databricks + creating a cluster + executing + waiting for results.

In order for this to work, you’ll need to have a subset of data available in your Databricks CI conf settings, because the job needs to take like 25 minutes or less, or it will just fail. You want the fast feedback at this point, anyways. Eventually we’ll write something that can do a more complete run on the data.

This is what we use for our project

Send your notebooks to Databricks

Run this file like ./send-to-databricks.ps1 BI-4811. It was written for Windows, but a shell script should be similar.

Deploy your library code to Databricks

You'll need to set up databricks-cli for this bash script to work. And be mindful, cuz this will overwrite everything.

Jest - mock a single function in a module

Though the requireActual route looked promising, it only worked when I called the mocked function directly in my test,…

In Soviet Russia, ad finds you

This is a post I wrote for work to explain the basics and foundations of ad tracking. It was…